From Buddha to Beethoven

“The only way to live is to accept each minute as an unrepeatable miracle.”
-- Storm Jameson

The summer solstice by the Bow River. Are the birds singing their one song or their consolation song? In my mind it is not a consolation song but a summer song of verve and vitality. I don’t suppose a bird stops to think about his or her voice wondering if it is good enough, worthy enough or melodic enough. No, I imagine birds awaken as the first morning blush chases away the darkness and sing, not for their breakfast or their supper but just because they are alive.

I was thinking that today as I cycled around Lake Minewanka loop feeling full of life, inhaling the fresh aromas of summer, the green energy of the pine trees, aspens and grass. “I am here now in this moment, with no guarantee of what the futures holds but knowing this is enough.”

Now I guess that is truly what the Buddha was trying to tell us. The problem I have with him is he had his eyes closed, focusing on his inner world. It feels to me that he was closing out the wonders of being alive on this blue green planet spinning through the galaxy at some mind-boggling speed. At this time of the year I want to keep my eyes, ears and nose wide open to embrace the shinning sage waters rushing through the log jam, the song birds, blue butterflies, sweet smelling wolf willow, delicate five petaled flowers with yellow centres and the slipper orchid. Can there be anything more precious than the astounding Alberta wildflowers?

That brings me to Beethoven. I watched a movie called “Copying Beethoven.” He walked in places like this, by rivers and forests listening to their magic. Then at home, using his dazzling creativity he wrote brilliant Symphonies. Flutes, violins and drums echoed the sounds he heard in the environment. The amazing thing is he remembered nature’s wild melodies after he went deaf. With his ears shut off to the external world he tuned into the sounds of his delicious inner world and continued to produce harmonious compositions that he was never able to hear.

While the Buddha left a heritage of verbal teachings, Beethoven left a legacy of musical masterpieces all inspired by the natural world.
Posted by moonshadow at 9:00 PM 1 comment:

OK I am still challenged by my blogging skills. The photos in the last post are from a backcountry ski trip to Socerer Lodge in British Columbia.
The bottom on is Jeanie McBroom up on the ridge behind Amsikwi - just for the record it was about minus twenty.
Posted by moonshadow at 7:20 PM No comments: 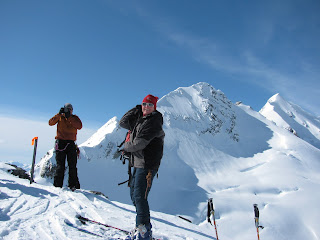 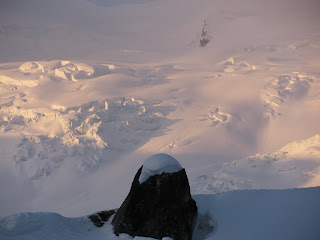 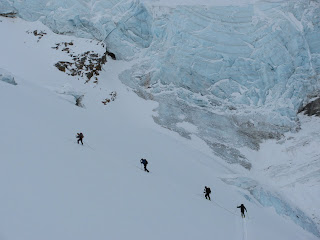 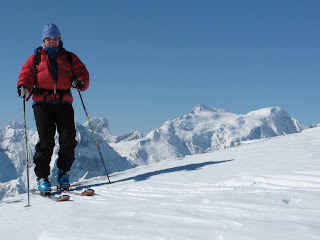 Posted by moonshadow at 8:11 AM No comments:

While I scaled mountains in strange lands,
The world arrived in Scotland
The white mainstream Scotland of my youth
Has morphed into a rainbow blend
Second generation Asian speak with Scottish brogue

At sixty I am woman who has come hame to herself
Found my inner place an expanding pool of light
My roots have suckered across continents
And intertwined with the global community
In an intricate Celtic Knot.
Posted by moonshadow at 8:07 AM No comments: