My Mother’s Story  by Wilma G. Rubens
Dedicated to my female forebears who were nurses – my Scottish grandmother Russell was the matron of a hospital, her daughter, my aunty Ella was a nurse and married a surgeon, her daughter Anne trained as a nurse and midwife, my mother Gladys, her sister Amy and my own sister Dorothy were nurses.

At my mother’s funeral her sister Agnes told me “As a young woman she was a snob and a great one for the boys. She lived more in heaven than earth.”

Born in Belfast 1911 my mother Gladys was the oldest of three sisters and one brother. Growing up she experienced ‘the troubles’ and drunken men fighting in the streets. Her mother, my grandmother Agnes Cargo said that she would never have had all those kids if she had heard of Marie Stopes. Stopes was a campaigner for women's rights and a pioneer in the field of family planning.

In the past humanity has been devastated by infectious diseases.  My mother’s beloved Grandmother Marie Cairns had five children. Amelia 18 and Margaret 23 died of tuberculosis. Hodgkin’s disease killed Tommy at 24 and a duodenal ulcer killed William at 37.

Mother left school at 14 and became a skilled tailoress. Her ambition led her to talk to an influential man and she was accepted into nurses training. As a child she taught me to make my bed with tight envelope corners and no creases in the sheets. “When I trained we worked 70 hours a week,” she told me. “The sisters were very strict. We had to make the beds perfectly.”

After her training in Ireland she left to work at a sanatorium in England. Her young patients had tuberculosis. The treatment was based on fresh air and rest. 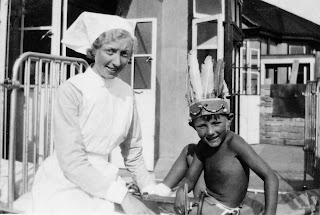 She contracted Tuberculosis at the hospital. I don’t know how long or how ill she was. I do know that she recovered with close attention to her diet. I am certain we were the only family in central Scotland that ate brown bread, salads and made visits to the Health food store to buy coconut treats. For sure none of our neighbors made treacle scones with soya flour. One day as a child I accompanied my mother to the Doctor to have her lungs x-rayed. She was very quiet and I sensed she was embarrassed as if she had something to hide.

After her recovery she trained at Glasgow Royal Infirmary to become a midwife. She worked in the borders of Scotland during the Second World War as a public health nurse and midwife. She told stories of courageously driving at night through the snow to deliver babies. 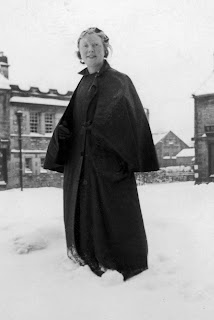 She became a fervent evangelical Christian. I imagine she met my handsome father, a minister, at some church event. When she married him I can only imagine how difficult it must have been for her to give up the career she had worked so hard for. I remember taking Mother to visit her younger brother my uncle Harry and how he challenged her, “Why can’t a man have a drink in the pub with his son or daughter?”

And now we face the corona virus. A new experience for our generation. I have a profound respect for my mother’s recovery and her incredible dedication to care for the sick.
Posted by moonshadow at 8:15 PM